On the Irrawaddy, A Story of the First Burmese War(1897) 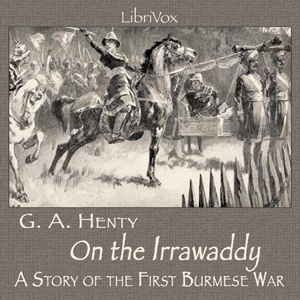 audio
On the Irrawaddy, A Story of the First Burmese War(1897)

LibriVox recording of On the Irrawaddy, A Story of the First Burmese War (1897), by G. A. Henty.
Read by Mike Harris

With the exception of the terrible retreat from Afghanistan, none of England's many little wars have been so fatal--in proportion to the number of those engaged--as our first expedition to Burma. It was undertaken without any due comprehension of the difficulties to be encountered, from the effects of climate and the deficiency of transport; the power, and still more the obstinacy and arrogance of the court of Ava were altogether underrated; and it was considered that our possession of her ports would assuredly bring the enemy, who had wantonly forced the struggle upon us, to submission. Events, however, proved the completeness of the error. The Burman policy of carrying off every boat on the river, laying waste the whole country, and driving away the inhabitants and the herds, maintained our army as prisoners in Rangoon through the first wet season; and caused the loss of half the white officers and men first sent there. The subsequent campaign was no less fatal and, although large reinforcements had been sent, fifty percent of the whole died; so that less than two thousand fighting men remained in the ranks, when the expedition arrived within a short distance of Ava. Not until the last Burmese army had been scattered did the court of Ava submit to the by no means onerous terms we imposed. G.A.Henty.

Reviewer: Sorker - favoritefavoritefavoritefavoritefavorite - August 12, 2010
Subject: The US$52 Billion War Destroying the Last South Asia Superpower.
This 1897 book is one (a good one) of the last of Henty's "122 works of historical fiction" (he was publishing one every 3 months in his last years). The original text [find it at www.archive.org] has illustrations but no maps. Have a good map at the ready and chapter 1 will give you a sense of the geopolitical background. Modern listeners would do well to read a summary background of this 1824 war; two excellent versions are at Googlebooks' "Early mapping of Southeast Asia" at pg 259 and "South East Asia, Colonial History: Empire-building in the Nineteenth Century", Chapter 25. For large-scale maps, see http://www.zum.de/whkmla/histatlas/seasia/haxburma.html

During the 1800s all of South and Southeast Asia came under European rule - Britain to the West of Siam and "French Indo China" to the East of (and taking part of) Siam. This novel is a first-person view of how (save for India proper) that occupation began - with the Burmese-vs-British (pre-Raj) war of 1824-26 to respond to Burmese invasions/incursions/threats of what was a new "Burmese bulge" into East Bengal and the Eastern principalities in today's Indian territory lying North and East of Bangladesh. This first "war was the longest and most expensive war in British Indian history. [15,000] European and Indian soldiers died, together with an unknown number of Burmese army and civilian casualties. The campaign cost the British [5-to-13] million pounds sterling [roughly US$20-to-$52,000,000,000 in 2009 dollars] that led to a severe economic crisis in British India in 1833.” The British captured almost all of the Burmese littoral area in this war. Burma was increasingly occupied by two more British wars (to 1885) and remained a province of British India, gaining "self-rule" only in 1937 and independence in 1948.

It is important to understand how powerful and highly aggressive the Burmese were at this time. In 1767, after extended warfare, Burma had defeated regional-superpower Siam and razed its great capital, Ayutthaya, then the largest city in the world. China then attacked Burma's Northern border and (with Siam pushing from the South) the Burmese were forced out of Siam. At the time period in which this book begins, the still-powerful Burmese were continuing attacks on independent states to Burma's West, eventually meeting up with (and entering) British India around 1819-23, thus giving rise to this 1824-26 bloodbath that destroyed for over 100 years the civilization, independence and economy of Burma. Burma was forced to pay war reparations and to permit British trade. Regardless of "fault" under 1800s "law" of war, the history makes this book both interesting and important to a current understanding (not acceptance) of why modern-day (one cannot say "modern")Myanmar has been so self-isolated, and repressive, since the expulsion of the British in 1937 and the Japanese in 1945.

Thanks, Mike Harris, for a great reading. Mike is MAE (Male American English)and a sonorous, near professional-quality reader. The pronunciations seemed correct to my untrained (in these cultures)ear and he handles dialog fairly well. Mike has his EQ adjusted to the bass end (or is that all you, Mike?) but the recording quality is excellent. I will look for more of Mike's talent on LibriVox.

Northern Myanmar has some of the most incredible ancient cities and archeological sites in the world. I gained access there in the early 1980s, when limited entry was just-then becoming allowed. Rangoon was (is) a city that “stopped” as an 1900 time capsule of English architecture fallen to widespread disrepair. I traveled up the Irrawaddy from Rangoon to Pagan and Mandalay; subsisting often on boiled potatoes, carrots and water buffalo. The military regime is now inaccurately "restoring" Pagan into a tourist destination.

Uploaded by librivoxbooks on August 11, 2010